After being entreated by Joseph Smith (Part 6) to read the Book of Mormon and see if he would feel a “burning in the bosom” to “know that it is true,” our hapless man remained quite trapped when…

[Begin the Man in the Well BLOG Series from the first installment, the Greek Orthodox Priest] 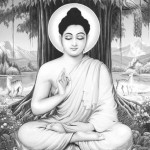 and a host of others too numerous to mention, but all to no avail. I was still in the well.

Most of the Eastern teachers told me to practice various forms of asceticism, and described how, in their countries, holy men, as they called them, sometimes spent days on beds of spikes, or in swinging between the five fires under a blazing hot sun. Others, they said, held an arm up until it withered and became stiff, so that they were unable to bring it down again. Many allowed themselves to be buried in the earth up to their necks and had to be fed by their friends.

Some lay on their backs, gazing up at the noonday sun until they were blind. Numbers measured their length on the ground for many miles. Others took a vow of silence. A few lived in dens and caves so dark that they lost their sight. To make long pilgrimages to sacred shrines was a common practice; while to bathe in the sacred waters of the Ganges and other rivers was a method used by countless millions.

If I, they said, could only manage to “do” some of these things, to afflict myself in some way, torture my body, I would surely obtain deliverance. When I asked these teachers if the ascetics of whom they spoke had succeeded in obtaining what was sought, they were silent.

Deciding to go to the limit in self-salvation, I removed my clothing, and exposed myself to the bitter cold. Then I took a stone and deliberately pounded my legs and arms so that I was black and blue and could scarcely bear the pain. From time to time I knocked my head against the stones in the wall, with the result that I fainted and lay for a time as if dead.