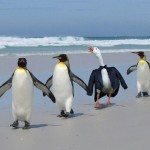 A goose in penguin’s clothing…

First, let it be known that Jehovah’s Witnesses claim to be a “Prophet of God.” See The Watchtower, April 1, 1972 & see the definition of a false prophet in Deuteronomy 18:21.

1914 > “The present great war in Europe is the beginning of the Armageddon of the Scriptures.” —Pastor Russell’s Sermons, p. 676 (SM676 in the linked PDF file)

1918 > “Therefore we may confidently expect that 1925 will mark the return of Abraham, Isaac, Jacob and the faithful prophets of old, particularly those named by the Apostle in Hebrews chapter eleven, to the condition of human perfection.” —Millions Now Living Will Never Die, pp. 89-90

1976 > “Armageddon will come after the time period corresponding with the time between Adam’s creation and Eve’s creation.” —The Watchtower, 7/76, p. 436

These are just a few of the false prophecies that the Organization has made, but the question is:

* Most of the links are from a site called WTArchives. Their site has many scanned WTB&TS books, magazines, newspaper clippings, etc., as well as materials from precursor groups such as the Millerites.

The files are large (full books often) and can be slow to load but it it well worth the wait to read original materials.

They do not have more recent materials so you will not find a link for every publication on this page. We will work to find more links to share.