And now for the full conclusion of our series, The Man in the Well, by Oswald Smith:

“I am Jesus Christ, God’s only begotten Son,” was His reply. 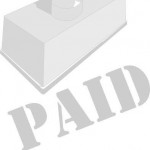 I fell at His feet and worshiped Him, for my love was such that I could have died for Him.

After a while I told Him about all the others, how they had come and offered help, what promises they had made, and my own conclusions regarding them.

“That,” said He, “explains it all. Don’t you see the difference?”

Suddenly the light broke. This was God’s plan. And it was better, oh, so infinitely better than man’s “doing,” for here I was delivered. And yet I had nothing to do with it except to let Him. Then there flashed into my mind another word. It was the word

for lo, it had all been “done” by Another. And that Other—the Lord Jesus Christ. What a plan! What a provision! Oh, what matchless love!

Thus I came to see that there are two ways, and two only, that men take in order to obtain deliverance. One is “do,” the other “done.” The first is man’s, the second God’s.

No wonder it is “Good News” to the sinner who has been seeking by his own efforts to get out of the well of sin, to be told that it has all been “done,” that “Jesus paid it all,” that, as God Himself says in Ephesians 2:8-9, “For by grace are ye saved through faith; and that not of yourselves; it is the gift of God; not of works, lest any man should boast.”

As long as a drowning man thinks he can save himself, he cannot be rescued; but the moment he ceases his struggles, gives up his attempts at self-salvation, and yields to his rescuer, he can be saved, but saved, mark you, by another. And so you, too, my friend, must be willing to be saved by Another.

My friend, He died for you, and if only you will stop trying to save yourself, realizing that all your “doing” cannot in any way avail, and will simply accept the Lord Jesus Christ as your Savior, you, to, will be delivered. “put your trust in the Lord Jesus, and you will be saved.” Will you do it? Do it and do it—NOW!

Part 7b, Other Teachers