Beset by many visitors, our guy is more stuck than ever in this well. He has had priests come by, a rabbi, founders of 19th century religions and Eastern thinkers (see links to all at the bottom). He remains discouraged, dumfounded and literally beat up by his own hand. He has been told he must “do” many things to get himself out of the well…

No sooner had I reached this conclusion than, once again, 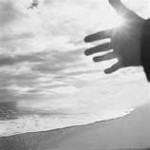 a shadow fell across the well’s opening. I glanced up, fully expecting to see another of earth’s teachers with some other form of manmade “do” advice. And I did.

At least I saw in dim outline the form of a man. Yet, somehow, He seemed different from all the others. Silently He stood there gazing down at me, while I, now utterly exhausted, lay flat on my back gazing up, far too weak even to sit, let alone stand.

“Friend, you are in need. Will you let Me help you?”

He had been the first to speak, but, oh, that voice—will I never forget it! Not a word of reproof, not a single expression of condemnation did He utter. And, as I watched, He smiled. Such a smile! Never had I seen the like before.

“Help? Yes, help!” I whispered, too far gone to speak aloud, yet vaguely wondering what He would tell me to “do.”

How it happened I do not know. I never have been able to fully understand. All I can remember is that, without answering a word, He was at my side. Putting His strong, loving arms around me, he picked me up in my weakness, and the next thing I knew we were sitting together at the top of the well. And lo, it was broad daylight!

“How could you do it?” I cried, my whole soul filled with ecstasy. “And who are you?”

In answer He showed me His hands, and His feet, and, to my astonishment, I saw in each the print of a nail. He silently pointed to His side, and there I discerned the mark of a spear thrust. At last, in answer to my question, He replied, in part, as follows:

“I earned the right, you see. I knew you were in the well, and that nothing you could ‘do’ would ever get you out, and so I did all that was necessary to be done in order to deliver you.

I took your place. It cost Me My life’s blood. I went down to the very bottom of the well, but I did not remain in it. And now, since I Myself got out, it is possible for Me to deliver others.”

“But who are you?” I cried again, my heart flooded with joy and filled with unutterable peace.

“I am Jesus Christ, God’s only begotten Son,” was His reply.

I fell at His feet and worshiped Him, for my love was such that I could have died for Him.

Stay tuned for next week, our last in the series by Oswald Chambers, The Man in the Well.

Part 7b, Other Teachers