After a long and difficult time, pondering the many deeds the Roman Catholic priest (Part 3a & Part 3b) had told him he must do, along comes…

[Begin the Man in the Well BLOG Series from the first installment, the Greek Orthodox Priest] 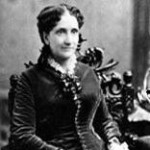 I had almost given up hope when I happened to look up again, and, to my surprise, saw a woman sitting by the side of the well. Once more I sprang to my feet and cried for help.

“What would you have?” inquired the woman in a voice of tender solicitation.

“But my friend, you are not in a well. No well exists. There is nothing wrong. It is all your imagination, a delusion of mortal mind. You did not fall; you only think you did. Disbelieve that you are as you think you are, and you will soon be all right.

“Meanwhile, read this book. It is the Key to the Scriptures. I wrote it myself.

“Jesus never ransomed man by paying the debt that sin incurs; whosoever sins must suffer. The material blood of Jesus was no more efficacious to cleanse from sin when it was shed upon the ‘accursed tree’ than when it was flowing through His veins as He went daily about His Father’s business.

“Petitioning a personal Deity is a misapprehension of the source and means of all good and blessedness; therefore it cannot be beneficial.

“There is no human soul that sins and is spiritually lost.

“Mortal mind alone gives drugs their effects, and if a person swallows arsenic by mistake, the belief of the vast majority of human beings that arsenic is poison causes death, even though he was unaware that he had swallowed it.”

With that she stood up and turned as if to leave.  Amazed at such strange advice and wondering who she could be, I asked her to tell me her name, that I might adequately thank her when I got out—that is to say, if I were in.

“Mary Baker Eddy,” came back her answer in tones of unusual sweetness. Ah, yes, I had heard of this woman’s teaching. Christian Science, I believe it is called. At any rate, it would be worth trying, I thought. I tried to convince myself that I only imagined my predicament. Yet, I was unable to shake off the conviction that I was really down in the dismal, dark well.

However, having nothing else to do, I spend much time reading the book which Mrs. Mary Baker Glover Patterson Eddy had given me—Science and Health. But the more I read it, the more nonsensical it seemed. Worse still, it so frequently contradicted the Bible that I became greatly mystified.  For the Bible, I remembered, plainly taught that Christ did give Himself a ransom for all (1 Tim. 2:5, 6), and that we are reconciled “through the blood of His cross” (Col. 1:20), for “without shedding of blood is no remission of sins” (Heb. 9:22). As a matter of fact, the Scriptures plainly warn men against this very cult. (Col. 2:8; 2 Thess. 2:11, 12)

Next week, join us for Part 5, Charles Taze Russell, founder of the Jehovah’s Witnesses…