Having just spoken to a Greek Orthodox priest, we left our poor fellow deep in the well clutching an ikon of the holy St. Nicholas. (Part 1) And along comes… 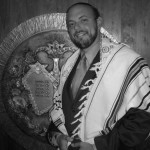 While meditating on all this, I chanced once more to glance up, I exclaimed, my heart overflowing with gratitude, “I have fallen into this well and know not how to get out. Please tell me what I must do.

“Ah, yes, my son, that I will. It is always a pleasure to help the unfortunate.”

“Most learned Rabbi, hope already burns within my breast. Only speak and I will listen,” I entreated.

“Three times a day!” I exclaimed in dismay. “Then I cannot get out at once.”

‘”Patience, my son, patience. There is plenty of time.”

“And is that all?” I asked, my eagerness vanishing.

“Oh, no,” answered the rabbi. “But listen now and do not interrupt.”

“Pardon me, Rabbi. Please continue and I will be silent,” was my reply.

So he did, and this is what he said:

“The one who reads the Shemah (passages in Deut. 6:4-9) and prays will inherit both this world and the world to come.” (Talmud, Tractate Berakhoth 16b).

“Then, too, there are nine well-known precepts—honouring father and mother, the price of charity, attendance at the house of study morning and evening, hospitality to wayfarers, visiting the sick, dowering the bride, attending the dead to the grave, devotion in prayer, and making peace between man and his fellow; but the study of the law is equal to them all (Daily Prayer Book, Singer’s translation, page 5).

“Yea, anyone who studies the law is sure to inherit the world to come.” (Talmud, Tractate Berakoth 28b)

Without the loss of a moment I commenced most diligently to do all that the learned Rabbi had said.

And yet, I felt that there was something lacking. My mind instinctively kept going back to the commandments of Moses. Why had not the Rabbi mentioned them? Why had he not spoken of the sacrifices demanded by the Law? Could it be that he considered the Talmud of greater importance and authority than the Scriptures? Strange, I thought, that he should quote from man’s writings and ignore God’s.

Hence, to make sure of deliverance, I sought to obey not only his commands, but also those enjoined by the Law of God. I did not steal, nor take the name of God in vain.  Neither did I commit murder, nor was I guilty of adultery. No god did I own but Jehovah.  The Sabbath day I kept, and all the other commandments I faithfully obeyed.  But the sacrifice I could not offer, since God had ordained that it must be slain only in the temple at Jerusalem; and here was I, far away from the temple and without a sacrifice.

Though I obeyed most diligently the injunctions of the pious Rabbi, yet, I remained in the well.

“I can give you no assurance,” said the rabbi. Yet Jesus said in the New Testament:

“I am the way, and the truth, and the life. No one comes to the Father

Next week, Part 3a, The Catholic Priest

Begin the Man in the Well BLOG Series from the first installment, the Greek Orthodox Priest