This is a story about a man who fell into a well and could not possibly get out by himself. 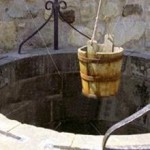 As he sits, stunned and in pitch dark, pondering his predicament, several men of faith pass by to explain to him how he could save himself.


As you can surely surmise, this man will have visits by the founder of the Jehovah’s Witnesses (Charles Taze Russell), a Jewish rabbi, a Roman Catholic priest, Joseph Smith (the founder of Mormonism), among others. Each gives him tasks to perform until he cries out to God in utter frustration and is answered by the Lord Jesus.

Taken from a book by Oswald J. Smith, The Battle for Truth, 1970, this story brings into vivid focus the impossible demands of all but Christ to find salvation for one’s soul.

While walking across the fields one night, I suddenly fell headlong into a deep, but empty well. I was stunned by the force of the fall, but as I gradually recovered and realized the seriousness of my predicament, I began to wonder how I could get out!

Save for a single shaft of light that shone through the opening far above me, I was in pitch dark. I felt the walls of the well and found them wet and clammy. I shuddered at the apparent hopelessness of my plight…

Presently, my attention was arrested by a shadow that fell across the opening, and upon looking up, I observed a man standing at the top of the well.  Instantly, hope stirred within me and, staggering to my feet, I cried aloud for help!

‘”My son,”  responded the man, “I am a Greek Orthodox priest, and I will be glad to do anything I can for you. What is it you desire?” I saw looking down the heavily bearded face of a large man. But what especially arrested my attention was the full flowing robe with which he was covered, and the mitre on his head, all of bright orange colour. In his hand he carried a censer from which issued incense.

Observing that I was looking at him, he asked me about my plight.  I told him how I had fallen into the well, and pleaded with him to help me out.  To which he made answer as follows:

“Sir, the Greek Orthodox Church, in which I minister, has been made the custodian of the seven mysteries of Christianity.  There are, for instance, the mysteries of Baptism and the Anointing with sacred oil.  By these two you become a member of the Church.  As I anoint with oil I repeat:  ‘The seal of the Holy Ghost.’ Thus, your original sin is gone.”

“Then come the mysteries of Confession and the Holy Communion. Through these your actual sins are purged away. Of course, you are enjoined to keep all the commandments of the Word of God and of the Church, since both are equally inspired.”

“Ah!  That I cannot promise. You may and you may not. I can give you no assurance. Only on the day of judgment can you know. If not, yet there is comfort, for by payment of sufficient money the Church will pray for those who are still in the well.  And to help us, we have millions of ikons (holy pictures) to which prayers are offered with the hope that the saint before whose image we bow will pray for those still left in the well.”

Thereupon I decided to fulfill all the conditions laid down, for I was in a desperate plight. A much prized ikon of the holy St. Nicholas was given me, but it availed nothing. I was still in the well.”

Next week, Part 2, The Jewish Rabbi…